skip to main | skip to sidebar

Welcome to the revolution(s)


The following is a rough transcript of my toastmasters speech 7: "Do your research"


The Luddites were a protest group that primarily operated between 1811 and 1816.  They were primarily workers in the garment industry.  They started riots and destroyed machinery.  These days, the name Luddite is applied to anyone who struggles with or opposes new technology.  However, the original Luddites however weren't so much opposed to technology as  to it's effects.  In particular they feared the loss of work from automation and the replacements of skilled labour with unskilled.

The Luddites were correct in their fears.  The industrial revolution eventually resulted in better working conditions, better wages and an improved standard of living standard.  However it took a long time to get there. On the way, it resulted in widespread pain and unemployment.

Mr chairman, fellow toastmasters and guests, welcome to the revolutions.

I am going to talk about the one happening right now, the fourth industrial revolution.

There area number of technologies making up IR4 such as

Most of these are autonomous, things that happen without human intervention.

Individually any of these would have a large impact.  together, it is a perfect storm of change.

Let me give you a few examples:
Every major car manufacturer is working on self-driving cars.  Tesla has one out now.  Uber is trialling self driving cars in Pittsburgh this month.

Major truck manufacturers such as Mercedes Benz and Volvo are working on self driving trucks.  The intention is that a local driver will drive the truck to a motorway, the truck will drive cross country to near it’s destination and then a second driver will handle driving the last few kilometres to the final destination.  Long haul truckers will become short haul truckers

IBM have been working on an AI called Watson.  A few years ago it won the American game show Jeopardy, beating out previous champions.
Now it is being used in medicine, as a laywer and in other fields such as teaching

Amazon is my poster child for IR4.  They started out as a website bypassing physical stores to reduce prices.  They have giant warehouses heavily using robots and autonomous delivery cart.  Now they are working on using drones to deliver directly to purchasers.


What is the impact?

There is going to be a big impact.  Many job categories will disappear or become much smaller.


Most of the 137m SE Asians work in the garment industry, the industry that gave us the original luddites.

“Foxconn replaces 60,000 factory workers with robots”
Foxconn is the company that makes iPhones.  They employ 480,000 people.  Well they used to, now they employ about 420,000.  These are people that make $5 per day, and it is still cheaper to use robots.

If you think China is too far away to care about, Watties is right next door.  They have been replacing workers with robots for the past 20 years 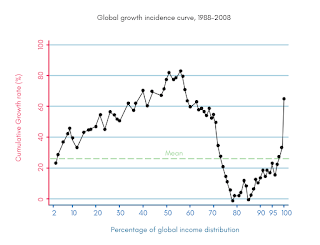 This graph is both good news and bad news.
Good news.  If you are rich, well you got even richer.
If you are poor, then it’s also good news.  Offshoring and globalisation have made many of the poorer countries much better off.
But for those of us in the room, we mostly fall in the 80-95% range.  And we haven’t seen much growth in our incomes.

IR4 may (and we don’t really know) make the dip even wider, as the rich keep getting richer but the drop in employment reducing incomes for the rest.

What can be done?

Before the 1st IR, the average working week was about 70 hours.  Now it’s more like 40.  If half of the jobs disappear then perhaps we will only need a 20 hour week.  The French have already started moving in this direction.
The UBI is a payment made to every adult in a jurisdiction with very few eligibility criteria.  It provides enough money for people to live without working and replaces most government benefits.  It’s much like National Superannuation if it had a starting date age of 18.
This is been trialled in many areas around the world.
Education will be key, but it will be lifelong education as employment requirements change.
In the long term, the 1st industrial revolution was a good thing.  It reduced working hours, lowered the cost, and raised the standard, of living .  However there was a lot of pain along the way.  We can expect this again, the trick will be to navigate the 20-50 years till we get there.

Sean
I write commercial and shareware software, mostly in delphi. I am CIO at Catalyst Risk Management (www.crm.co.nz) and run Source IT Software (http://www.sourceitsoftware.com).