skip to main | skip to sidebar

TLDR: Everything is twice as fast

Initial impressions are mostly good.
Setup was annoying
Recognition of the card when hot plugging is OK, but not outstanding.  Typically takes 20 seconds for the card to recognised and my external monitor to be activated.
The internal clearance is a bit tight.  When it arrived, the gpu fan was hitting the casing.  I had to remove the case (6 screws) and do some precision adjustment with pliers to resolve this.

Initial setup is a pain in the arse, although it would probably have been easier if I had found the CD and read the instructions.

To set it up properly you should do the following:

Gaming performance on an external monitor is much improved as you would expect.  For every config that i have tried, I get 2 to 2.5 times the fps compared to the internal 1050 card.

Gaming on the internal monitor was also improved, but not as dramatically.  I got an extra 25% fps compared to the internal card.  However the minimum fps was much better. 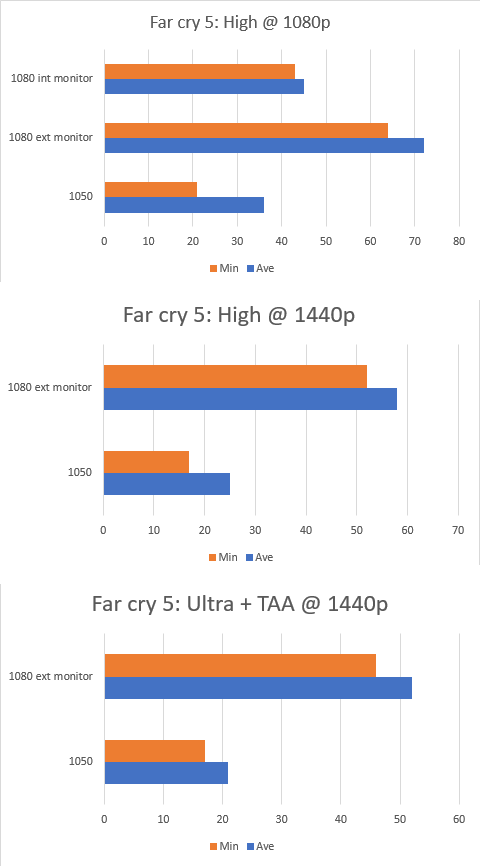 I also tried testing with Farcry 4.  Unfortunately I couldn't turn off vsync, so with the gaming box I got a solid 60fps @ 1440p with everything on ultra.  Using the internal card I averaged 28fps.

In Final Fantasy 15, I am getting 50 fps on highest settings.

Overall I am pretty happy with this.  Every game that I have tried has been able to run at 1440p on highest/ultra settings at a playable framerate.

thank u for this setup tour. i m facing a problem with my aorus game box gtx1080. i have the exact same laptop as yours. the problem is when i m connecting my game box to my laptop the gamebox starts making normal running noise as if which ensures me that something is happening but the ligth doesnt turn on and the fan doesnt spin and my laptop doesnt connect to my egpu. what should i do ? any help would be appreciated.

I had that problem at first. I had to install the TB drivers before it was recognised. I suggest asking in https://www.reddit.com/r/eGPU/ as there will be more experienced users there.

Sean
I write commercial and shareware software, mostly in delphi. I am CIO at Catalyst Risk Management (www.crm.co.nz) and run Source IT Software (http://www.sourceitsoftware.com).